The Devil’s Dressmaker Comes to Visit

I mentioned in an earlier post that a dressmaker’s deal with the Devil is part of my next project. The dressmaker’s taking shape; here are a few images: 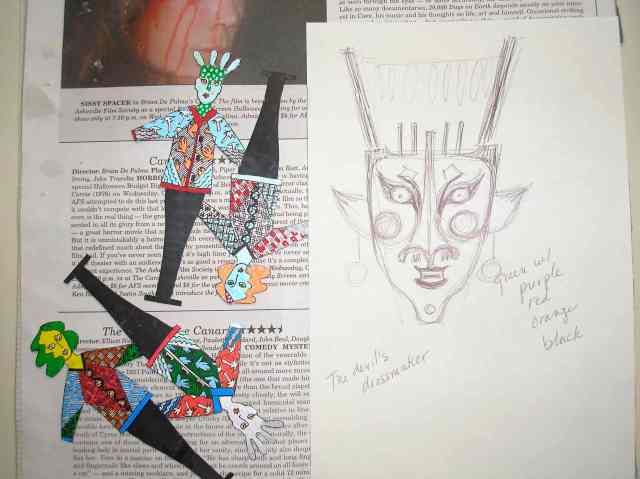 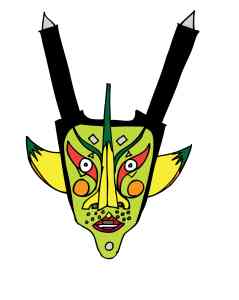 My papier mache versions of the head and scissors are coming along. I’m aiming to have them finished by spring, for some suitable costume event to be determined.

The devil’s dressmaker is my most Grimm-like character. I’m interested in the darker side of those fairy tales: Hansel and Gretel being fatted for the feast (Brothers Grimm) and red shoes dancing the wearer’s feet right off (Hans Christian Andersen).

For the first time, The Original Folk and Fairy Tales of the Brothers Grimm (published 2014) makes available in English all 156 stories from the 1812 and 1815 editions. Translator and editor Jack Zipes is a retired professor of German from the University of Minnesota and an authority on fairy tales. According to Zipes, fairy tales “serve a meaningful social function. . . . the worlds projected by the best of our fairy tales reveal the gaps between truth and falsehood in our immediate society.” In these original tales, grim realities are one step closer than you might recall from early readings: it’s not your step-mother or some nasty old stranger who’s out to get you, it’s a Close Relative. You can read more and see some great black and white images at:

According to current plan, the Devil’s Dressmaker is an itinerant seamstress who travels from someplace like Hell Hole Swamp in the Lowcountry of South Carolina (where she made The Deal with the bad dude) to someplace like the Blue Ridge Mountains. She carries with her huge pinking shears, collecting people’s stories along the way and passing them on to others she meets. When she hears the right story and passes it on to the person who most needs to hear it, she will be free of her curse. What the pinking shears have to do with it is very Grimm, indeed.

Released from her curse, the dressmaker is destined to head west to the desert, on bicycle, where she will meet The Shadow Man, a mountain hermit bearing some resemblance to my husband Carl, but also to a character in one of Hans Christian Andersen’s darker fairy tales (no reflection on Carl), which you can read here if you choose:

The Shadow Man started out as a photograph Carl took of his own shadow while sitting on top of a rock in Lesotho, in southern Africa. There will be more on the Shadow Man as the story unfolds Out West. In the meantime, early versions of the Shadow Man will also appear in an exhibit scheduled for May 2015 in Hickory, North Carolina. 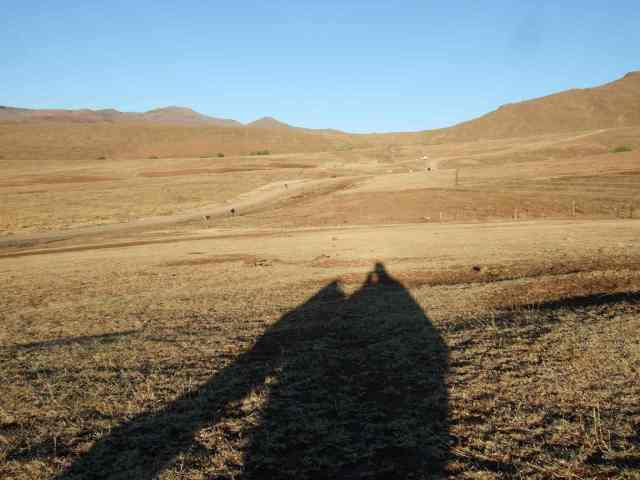 I grew up in the Appalachian "Bible Belt" of East Tennessee in the southern United States, listening to banjo music and gospel lyrics as well as the Beatles. As a kid, I was curious about religious rituals like speaking in tongues and snake handling but resistant to the fundamentalist thinking they involved. Flannery O'Connor's tales of religious fanatics, con men, bigots, and the spiritually bereft or ambivalent resonate for me. Despite having traveled widely and lived in other places, I am (as so many Southerners claim to be) permanently "South haunted." I returned to making art full time in 2011, following a career as a teacher, researcher, and consultant and after raising two sons. I’m convinced the delay enriched rather than impeded my growth as an artist.
View all posts by Lillian-Trettin →
This entry was posted in Mountain South, The Other South and tagged fairy tales. Bookmark the permalink.