In March I’ll ramp up efforts for an exhibit in July and a class next October. But for the past month I’ve processed my disappointment in and frustration with the new administration. Time will tell whether policy becomes more thoughtful, whether we are made “safer,” and whether any money is saved.

I have started writing my Senators. I designed a set of post cards and a sticker that I enclose in letters. These are for my benefit. They make writing fun. My key image is an Angry Guy.  He’s a symbol not a portrait.

He could be any Angry Guy, or he could be Trump, Stalin, Nixon, Bannon, you can take your pick. The very day we heard about the “well oiled machine” I was creating my own version of the Machine (below).

These are all attached here (angry-guy-stickers-copysay-no-talk-backwell-oiled-machine ) I copyrighted the Angry Guy, so be my guest. Print him out and send him to anyone you’d like. I’ve also put him on Redbubble. There’s even some (not-by-Ivanka) clothing to wear to rallies and so on.

Last weekend, I attended an exhibit of fifty spectacular examples of the Qu’ran on loan from Turkey to the Sackler Museum in Washington DC. I have never been in an exhibit so packed with all kinds of people, ranging from folks that looked just like me to women in full burka. I’ve attached a few pictures of the children’s events held that weekend. This was uplifting and it gave me hope. 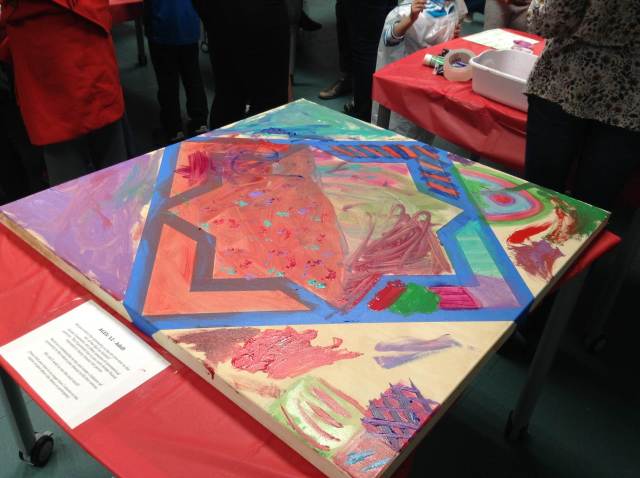 I grew up in the Appalachian "Bible Belt" of East Tennessee in the southern United States, listening to banjo music and gospel lyrics as well as the Beatles. As a kid, I was curious about religious rituals like speaking in tongues and snake handling but resistant to the fundamentalist thinking they involved. Flannery O'Connor's tales of religious fanatics, con men, bigots, and the spiritually bereft or ambivalent resonate for me. Despite having traveled widely and lived in other places, I am (as so many Southerners claim to be) permanently "South haunted." I returned to making art full time in 2011, following a career as a teacher, researcher, and consultant and after raising two sons. I’m convinced the delay enriched rather than impeded my growth as an artist.
View all posts by Lillian-Trettin →
This entry was posted in Uncategorized and tagged exhibits, political satire. Bookmark the permalink.